Investing in agroforestry in Peru's Amazon: Good for the economy and the environment

This article originally appeared in A BETTER WORLD: Actions and commitments to the Sustainable Development Goals, a publication of the United Nations Convention to Combat Desertification.

The Tambopata National Reserve in the Madre de Dios region of Peru is located between the fringes of the Amazon rainforest and the city of Puerto Maldonado. The land here had become degraded through both illegal mining and the single crop plantations of papaya that provided the community with much needed income but stripped the soil of nutrients. This type of practice led to deforestation, as farmers moved on in search of new plots of nutrient-rich land, often forested. These scenarios are rapidly changing due to a groundbreaking project to transform agriculture in the southeastern region of Peru run by local, non-governmental organization AIDER and supported by impact investor and leading global natural capital fund manager, Althelia funds, part of Mirova, an affiliate of Natixis Investment Managers.

AIDER is a technical partner of Initiative 20x20, a country-led effort to bring 20 million ha of land in Latin America and the Caribbean into restoration by 2020. So far, 17 countries and three regional programmes have committed to begin restoration of more than 50 million ha for the initiative, with the support of over 40 technical organizations and institutions. The partnership, with an acting secretariat within the World Resources Institute (WRI), combines expertise, intent and capital in the region to transform the dynamics of land degradation and advance restoration. An earmarked US$ 2.5 billion of private investment has been pledged by 20 financiers and impact investors, and restoration and conservation projects covering 10 million ha of land are already underway.

The initiative, launched formally at COP 20 in Lima, supports the Bonn Challenge, a global commitment to bring 150 million ha of the world’s deforested and degraded land into restoration by 2020, as well as the New York Declaration on Forests that seeks to restore 350 million ha by 2030.

The Tambopata National Reserve is an internationally recognized biodiversity hotspot in the Peruvian Amazon. Here, the lush tropical rainforests provide habitat for an enormous variety of rare and endangered wildlife. The organization’s first REDD+ project in 2009 involved 10 types of forest in the national rainforest and its neighbouring buffer zone. REDD+ projects provide AIDER with the ability to support conservation efforts through selling carbon credits.

The buffer zone sits just north of the Tambopata National Reserve where AIDER is working with the local community and farmers to restore land and incorporate sustainable agricultural practices. Here, papaya plantations are gradually being replaced with mixed agroforestry systems that benefit both people and the environment. The farmers are enthusiastic drivers of this project, a fact critical to its success. The types of tree used in the design of the agroforestry systems bring value to the farmers, increasing incentives to replace crops such as coca and papaya which had led to land degradation. They are now able to not only diversify their income, but also remain on the same plot of land.

It takes approximately 32 years to transform degraded land into dense forest, so dedication and understanding are key. In 2014, AIDER supported the establishment of the Cooperativa de Servicios Multiples Tambopata Candamo (COOPASER), then a cooperative of 21 farmers. This has since grown to 350, a remarkable success story. Part of the success is due to careful and intentional design. Agroforestry systems do not typically offer a quick return on investment, and the seasons are important considerations regarding harvests and income. So, a typical agroforestry system in this region is constructed to include a shadow component, for example banana or papaya; a main crop such as cacao; a recovery crop such as guava; and quick- and slow-growing timber species – together incorporating short and long-term income cycles for the farmer. Growing a mix of trees and shrubs in this way mimics the behaviour of a forest, and helps the soil retain nutrients and water, protecting the land and increasing carbon absorption. Indeed, restoration and conservation could deliver 60 per cent of emissions reductions needed by 2050 in Latin America and the Caribbean. 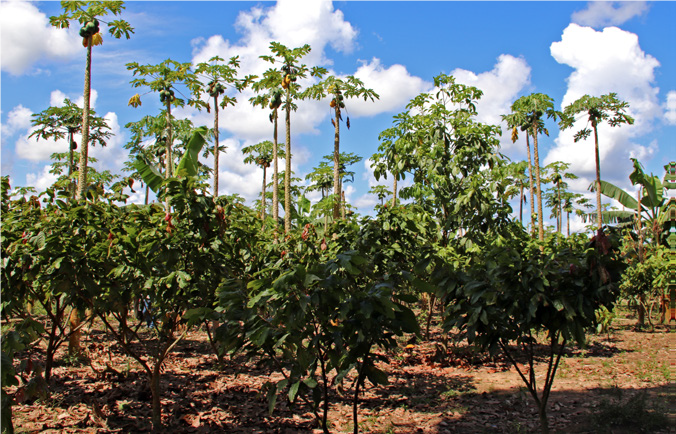 AIDER works with farmers to develop individual business plans. For every 40 ha of land, including 20 of primary forest and 20 of crops, farmers must manage a minimum of 3 ha using these types of sustainable practices. Mr. Pedro Villa is one of the farmers in the cooperative, with land on the outskirts of the rainforest. Many years ago, his land was home to virgin forest, but this was cleared to make way for a papaya farm with intensive use of chemicals. This has now changed.

The newly restored land has all of the appearances of forest but is, instead, a cleverly laid-out agroforestry system. Mr. Villa’s main income is cacao, of which he grows four varieties. Two types of soil help the cacao to establish and it takes six months for the fruit to emerge from each flower. Papaya is still present on the farm, but is now in service as a shade tree, sheltering the cacao that grows underneath. Boliana also grows here, a quick-growing timber species that matures ready for harvesting and selling within five years.

Mr. Villa arrived in the area in 1975 as a cattle rancher, motivated by incentives from the government at the time that led to widespread deforestation as farmers cleared forest for pasture land. Now, he says: “I am bringing back forest to my farm.” As he restores the pasture land, trees are returning to what is now a diversified farm where fruits and cacao are grown, and cattle and pigs raised. In 2017, he processed 3 tons of cacao, the raw ingredient of chocolate, and now he feels comfortable in processing 20 tons, a mark of huge success, this time of benefit to the environment.

At the processing facility, wet cacao arrives from Puerto Maldonado and is dried. The farmers’ cooperative collectively partners with a fermentation and drying facility, responsible for post-harvest production, and this is where Mr. Villa takes his harvest. The cacao beans are collected from each farm, then classified, weighed and left to ferment. Fermentation can take up to a week, after which the beans are laid out to dry under direct sunlight. After 20 days, the beans are ready for classification based on quality and type. They are selected for flavour and aromatics, relying on specialized staff for testing, and are then roasted, ground and refined for chocolate. In 2018, the facility received certification, with the result that the farmers can now earn an extra US$ 300 per ton. The facility is hoping to add an organic stamp to this certification which will add a further US$ 200 per ton.

Not far away, Mr Cirilo Sanchez, president of the COOPASER cooperative, is practicing agroforestry of a slightly different kind. Although he also grows cacao, he cultivates tropical flowers to sell to lodges in the rainforest. These lodges rely on colourful flowers to decorate the accommodation to service the increasingly popular ecotourism industry. He grows 15 varieties of flower, all native to the Amazon. In sympathy with the biodiversity of the nearby rainforest, he is now seeing wild trees populate his land. He also grows maize, cacao and bananas, as well as keeping cattle. Also helping to bring life back to the land is Mr. Sanchez’s use of makuna, an extremely invasive legume which he uses in the first stage of restoration to help fix nitrogen in soil previously depleted of nutrients. This prepares the soil for planting and is then cleared to make way for trees and crops.

To date, AIDER has restored and conserved 1,300 ha of forest within the Tambopata National Reserve buffer zone project. The role played by the organization, however, is not without risk. Illegal mining is rife, commanding huge swathes of land and destroying valuable virgin and secondary rainforest, and bringing in a steady stream of illicit money. The lives of those leading restoration and conservation efforts, such as AIDER, are often threatened, but their passion for change does not falter.

Althelia funds, a financial partner of Initiative 20x20, funds AIDER’s important work. This US$ 12 million investment programme is creating an economic buffer zone around a 570,000 ha forest (an area of approximately the size of Los Angeles). By helping local farmers with the transition to sustainable cocoa production, degraded land is being restored and deforestation pressures relieved. This creates a barrier to protect the rainforest and provides people with a forest-friendly and sustainable livelihood, with income generated through the sale of both carbon credits and cocoa.

The Althelia funds organization manages investments that deliver financial returns fully aligned with the conservation of nature and sustainable social development. They leverage expertise and capital to define pathways for innovative solutions to the climate and environmental challenges currently facing society. Althelia funds has invested in Ecosphere+, a leading company that is building a market for the environmental assets yielded by the fund, such as carbon credits, as well as for sustainably produced agricultural products, such as deforestation-free cocoa. Ecosphere+’s customers, a variety of companies ranging from large corporations to small and medium-sized enterprises, use a price on carbon and the purchase of carbon credits to finance forest protection projects, including the work of AIDER, which allows them to align their actions with global climate and development goals. 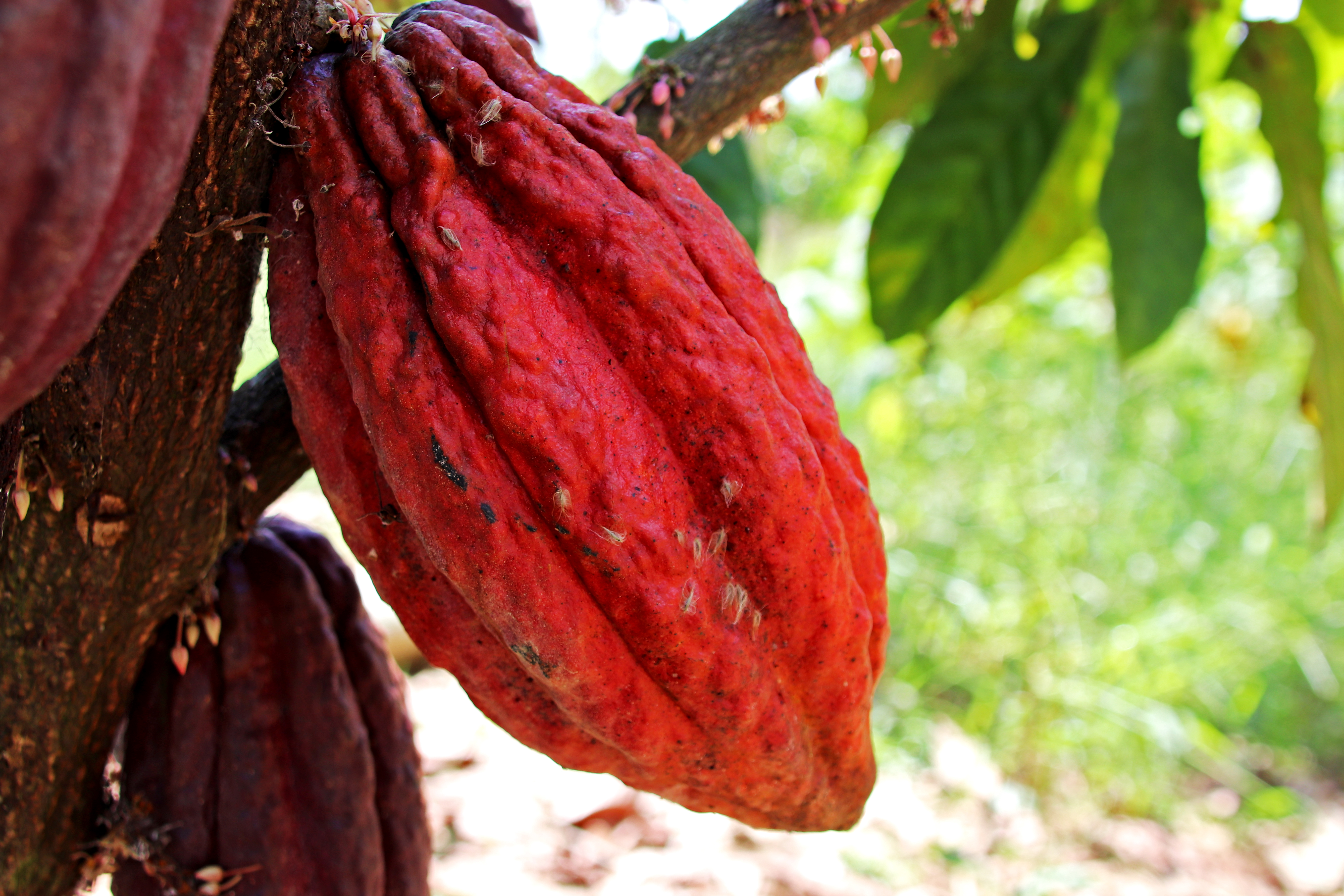 AIDER receives carbon income from conserving virgin and secondary rainforest and managing the risk of buffer zone projects by engaging the local community in sustainable agriculture including agroforestry, instead of reforesting the area and fencing it off. The region has become an attractive opportunity for investors due to the lower risk of its carbon credits. Local people have incentives to restore and conserve land because of the benefit to their livelihoods, presenting a lower risk for the carbon credits economy of increasing tree and shrub cover to reduce emissions. In short, money raised from the carbon credits of forest conservation is funding the farmers’ crops and agroforestry.

In recent years, more than 40 per cent (650 million ha) of forests in Latin America and the Caribbean have been completely deforested or degraded. These areas contain some of the most ecologically valuable forest ecosystems in the world, but recently 20 per cent of forest lands (nearly 350 million ha) have been completely deforested and a further 20 per cent (300 million ha) badly degraded. The drivers of this change include large- and small-scale agriculture, infrastructure projects, and mining. As a result, the bulk of the emissions in the Latin America region are generated not from energy but from land use, land use change, and forestry. Of the 4.7 GT emitted by Latin American and Caribbean countries in 2010, approximately 67 per cent was from land use and loss of forests.

Initiative 20x20 supports reforestation (natural and assisted) and the conservation of forests, as well as avoided deforestation, as elements of an integral restoration process. Cognizant of the various degrees of land degradation in the region, the initiative also supports efforts to recover land functionality — soil conservation and recovery; carbon storage; water retention and stable hydrologies; biodiversity conservation and recovery — through agroforestry, silvopasture, and other sustainable land use schemes.

The initiative inspires national commitments to restoration by engaging in a robust dialogue with ministers of agriculture and environment in the region, as well as making an economic case by assessing the societal benefits from restoration and avoided deforestation and establishing a financial mechanism that allows private sector impact investors to fund restoration projects. A WRI report in late 2016, The Economic Case for Landscape Restoration in Latin America, found that restoring 20 million ha of degraded lands in Latin America and the Caribbean by adding trees and improving farming practices would yield US$ 23 billion in net benefits over 50 years, a value equivalent to approximately 10 per cent of annual food exports from the region. That is an average of US$ 1,140 per ha.