Iberá is one of the planet’s great freshwater wetlands, covering more than 1.3 million hectares (3.2 million acres) of grasslands and marsh in northeastern Argentina's Corrientes Province. The landscape is a mix of swamps, bogs and rivers and is the second-largest wetland in the world. Iberá also supports unique wildlife, including more than 360 species of birds and large mammals like the jaguar.

Since the late 1990s, the Conservation Land Trust–Argentina and Douglas and Kristine Tompkins, the founders of Tompkins Conservation, have acquired more than 160,000 hectares in the Iberá watershed for two purposes: to expand the area under protection and to support sustainable agriculture.

The restoration of Iberá has required creative action to secure its long-term ecological integrity. Throughout the 20th century, Iberá was extensively degraded by cattle ranching and commercial plantations of non-native species. During decades of careless land use, several species native to Iberá disappeared, like the extinct glaucous macaw, the jaguar, the giant river otter, the collared peccary, the tapir, and the pampas deer.

With this history in mind, the primary goal of the Iberá project is to expand and upgrade conservation protections for the Iberá Natural Reserve, a protected area designated by the provincial government of Corrientes in 1983. The Reserve’s boundaries follow the borders of the Iberá drainage basin. The convergence of Iberá's hydrological and administrative boundaries has facilitated its protection. If its restoration is taken seriously, the Iberá region has great potential to develop a strong local economy based on the sustainable use of natural resources, primarily ecotourism. Thanks to the work of the Reserve authorities, many species of flora and fauna have spectacularly recovered after suffering from decades of degradation and poor land use. But there is still room for progress.

Currently, the Reserve is 40% public land and 60% private property controlled by some 1,800 landowners. Through habitat acquisition, restoration projects, public outreach, and legal activism, the CLT–Argentina team has worked for 15 years to strengthen the public core of the reserve, increase local support for conservation, defend the region against ecological threats, and restore wildlife populations. CLT biologists have successfully reintroduced giant anteaters, a native species that had been absent from the Iberá area for decades, have helped to bolster the population of pampas deer, and are working to restore jaguars and other missing species to the Iberá.

One key element of the conservation program is to spread biodiversity-friendly management techniques on agricultural land throughout the Iberá watershed. Consistent with a core-buffer-corridor model of landscape conservation, the various ranches owned by CLT in the watershed buffer the core protected areas from negative outside influences, while also modeling good environmental stewardship to neighboring landowners. The ongoing work to expand wildlands, create broad public support for conservation, and support a vibrant agrarian economy has achieved significant progress. 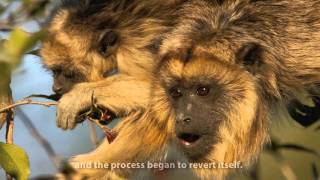