In 2009, Ejido Verde was established as a pilot project by the Mexican pine chemical industry to overcome the industry's 60-year, deforestation-induced decline. To boost the industry, which produces tape, chewing gum and hundreds of other products, Ejido Verde and its partners realized that indigenous people are the best stewards of their own land, and they set out to financially enable them.

The company has a triple-bottom-line approach: Economically, it helps indigenous farmers tap into the US$10 billion global pine chemicals market and guarantees a fair market price for all resin tapped. Socially, it raises living standards in Michoacán by providing new opportunities for young people to both restore degraded land and learn about sustainable business models. Ejido Verde also trains and educates resin-producers to strengthen effective community decision-making and forestry management practices. Environmentally, it relies on the restoration of severely deforested land as the central pillar of its business model. Without planting native pine trees, there is no Ejido Verde.

The company’s founding investors have a long-term vision. The native trees produce resin 8 to 10 years after planting, but continue to produce for up to 80 years. Ejido Verde also employs innovative financing structures to ensure that farmers can afford the upfront costs of tree planting and maintenance. To scale up its financing model, Ejido Verde has partnered with Kiva, a crowdsourcing platform that allows small investors to loan as little as US$25 to growing entrepreneurs.

When the trees start to produce resin, the farmers will pay back the lenders on Kiva, allowing the money to be reused again. Several indigenous farmers have raised thousands of dollars, which they have used to both restore land and provide for their families. Farmers pay back lenders with 10% of their annual resin sales. So far, thousands of investors from 66 countries have helped Ejido Verde provide 11 communities with zero-interest loans to plant and maintain new forests.

Ejido Verde sets farmers up for success through its strong emphasis on good forestry. 800 trees are planted on each hectare, and in 8-10 years each farmer can earn $4.40 from the resin that each tree produces. That's $3,500 per hectare per year. If Ejido Verde reaches its goal of reforesting 12,000 hectares by 2022, it could bring $1 billion of new revenue to indigenous smallholder farmers and create over 6,000 full-time jobs. Farmers who participate in the company's program can make $18,000 per year, over double the current annual income in the region.

The environmental benefits are substantial as well. Restoring thousands of hectares of native trees can raise water tables, prevent erosion, provide habitat for other plants and animals, and cool the landscape. Planting almost 10 million trees could also suck 6 million tons of carbon dioxide from the atmosphere. By creating a business model with restoration at its core, Ejido Verde puts local people first and supports the long-term economic, social, and environmental health of Michoacán's Purhépecha communities. 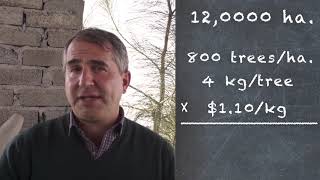