Ecuador occupies 0.2% of the Earth’s terrestrial surface and has some of the highest rates of endemism in the world. It also contains the fourth highest number of bird species of any country in the world. Due to monoculture plantations (palm oil, bananas, cacao and teak wood), logging, extensive cattle grazing and a prolific shrimp industry, the entire country has undergone massive deforestation. This rapid extraction of resources has placed many native and migratory bird species at risk, and in some cases at the brink of extinction. The American Bird Conservancy (ABC) and Fundación Jocotoco have partnered to purchase and restore some of the most important remaining tracts of intact habitat for priority bird species in Ecuador. ABC is assisting with tourism development to make these reserves sustainable.

From 2014 to the present, ABC has assisted Fundación Jocotoco in expanding six of its 11 private reserves (Antisana, Canandé, Narupa, Tapichalaca, and Buenaventura Reserves) by acquiring 3,720 ha.

In northern Ecuador, the acquisition of 47 ha to expand the Narupa Reserve has preserved valuable wintering habitat for Cerulean Warblers, a migratory bird species. Both the Cerulean's breeding and wintering habitat are being lost; its population has declined by about 70 percent in the past 40 years, making it one of North America's most threatened migratory songbirds. The eastern slope of the Andes, where Narupa Reserve lies, is one of the most important wintering areas for the species in Ecuador. ABC has also supported Fundación Jocotoco in the management of Narupa, which includes hiring additional park guards and training them to not only patrol the land to limit incursions but also manage the land to allow natural regeneration of secondary forest habitat, which Cerulean Warblers prefer.

In southern Ecuador, an additional 136 hectares were acquired since 2014 to expand the Buenaventura Reserve. These acquisitions protect some of the only remaining habitat for the rare and endangered El Oro Parakeet and the El Oro Tapaculo. At the Buenaventura Reserve ABC has also contributed significantly to the development of infrastructure for bird tourism (lodge cabins, hummingbird garden, and trail maintenance) to ensure the long-term financial sustainability of this protected area. ABC has also funded reforestation projects (8,363 native trees planted) and migratory bird monitoring in restored tracts. Through environmental education workshops with community stakeholders, ABC and Jocotoco have conveyed the importance of watershed protection, using native trees for ecosystem services and convincing local government officials to quit using invasive species (pine and eucalyptus) for restoration projects.

Our business model for this conservation project is to sustain these reserves trough the development of bird tourism. ABC’s Conservation Birding initiative encourages birders and nature travelers to “see it, save it” by visiting reserves in our Latin American Bird Reserve Network, using tourism income to support ongoing reserve management costs. In Ecuador, ABC has provided resources to improve marketing, promotion and lodging facilities at Tapichalaca, Narupa, and Buenaventura Reserves. Financial sustainability is critical for ensuring long-term protection of these reserves which are critical for species like the Jocotco Antpitta, an AZE (Alliance for Zero Extinction) species, a species of bird that can be found nowhere else in the world.

ABC works with Fundación Jocotoco, an Ecuadorian nongovernmental organization established in 1998 to protect land of critical importance to the conservation of Ecuador's endangered birds and associated biodiversity. Jocotoco primarily achieves this by purchasing lands, restoring degraded areas and managing them as ecological reserves.

Southern Wings has provided important funding for part of the restoration. 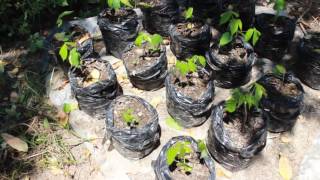