On November 8, 2015, Ollanta Humala, then president of Peru, signed a law into effect that established a new conservation area, the Sierra del Divisor National Park. Located in the western part of the country neighboring Brazil, the massive park spans more than 1.3 million hectares (3.2 million acres).

According to the Peruvian Times, Sierra del Divisor, "is larger than Yosemite and Yellowstone National Parks combined. It straddles parts of the Loreto and Ucayali regions and closes a final link to ensure the protection of a 67-million-acre area known as the Andes-Amazon Conservation Corridor."

Sierra del Divisor is a major win for conservation efforts in Peru. The park alone provides habitat for an estimated 3,500 species of plants. Threatened animals in the area, such as jaguars and tapirs, will also be protected as a result of the park's creation.

Still, native flora and fauna are not the only ones benefiting from the park's development. The protected area is also the home of indigenous communities, namely the Iskonowa.

The Andes Amazon Fund committed US$ 1 million to Sierra del Divisor's initial management. The Fund also supported the efforts of the Peruvian Society for Environmental Law (SPDA) during the development of the park. 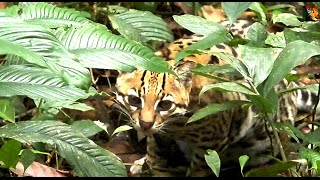