A new study published by WRI Brasil shows that by investing in research and development (R&D) native species can become a thriving part of Brazil’s forestry industry while restoring the threatened Amazon and Atlantic Forests. Leia este blog em português.

Brazil has a thriving forestry sector. According to the Brazilian Tree Industry association, the country’s forestry sector closed 2018 with a surplus of USD 11.4 billion and expects to attract investment of up to USD 7 billion through 2020.

However, for an industry in one of the most biodiverse countries in the world, Brazil’s forestry sector uses only a few tree species. Two non-native species, eucalyptus and pine, dominate today’s plantations, while native trees species like Brazil nut tree, Golden trumpet tree and many others are not commonly planted. Instead, these native trees are usually cut illegally from natural forests, contributing to the increase of deforestation and degradation in the Amazon.

Planting native tree species on degraded lands in Brazil could have a several benefits: meeting the growing demand for tropical timber and non-wood products in the global market, creating jobs and generating income for rural workers, reducing pressure on the Amazon rainforest, improving biodiversity, and fighting climate change.

A working paper released in early October during the IUFRO World Congress by WRI Brasil, with the contribution of several leading forest experts and researchers, found that to boost the use of native species in the timber industry, investment in science and technology is needed.

The study, Research gaps and priorities in silviculture with native species in Brazil, suggests that investments in research and development (R&D) to make native tree species more productive could boost the Brazilian forestry sector, helping the country achieve its Paris Agreement target of restoring 12 million hectares of degraded land and its Initiative 20x20 target of 22 million ha by 2030.

Following the success of the forestry sector

The success of eucalyptus in Brazil didn’t happen by chance. The Australian species received significant investment in R&D over the last decades that greatly improved its productivity (see figure below). 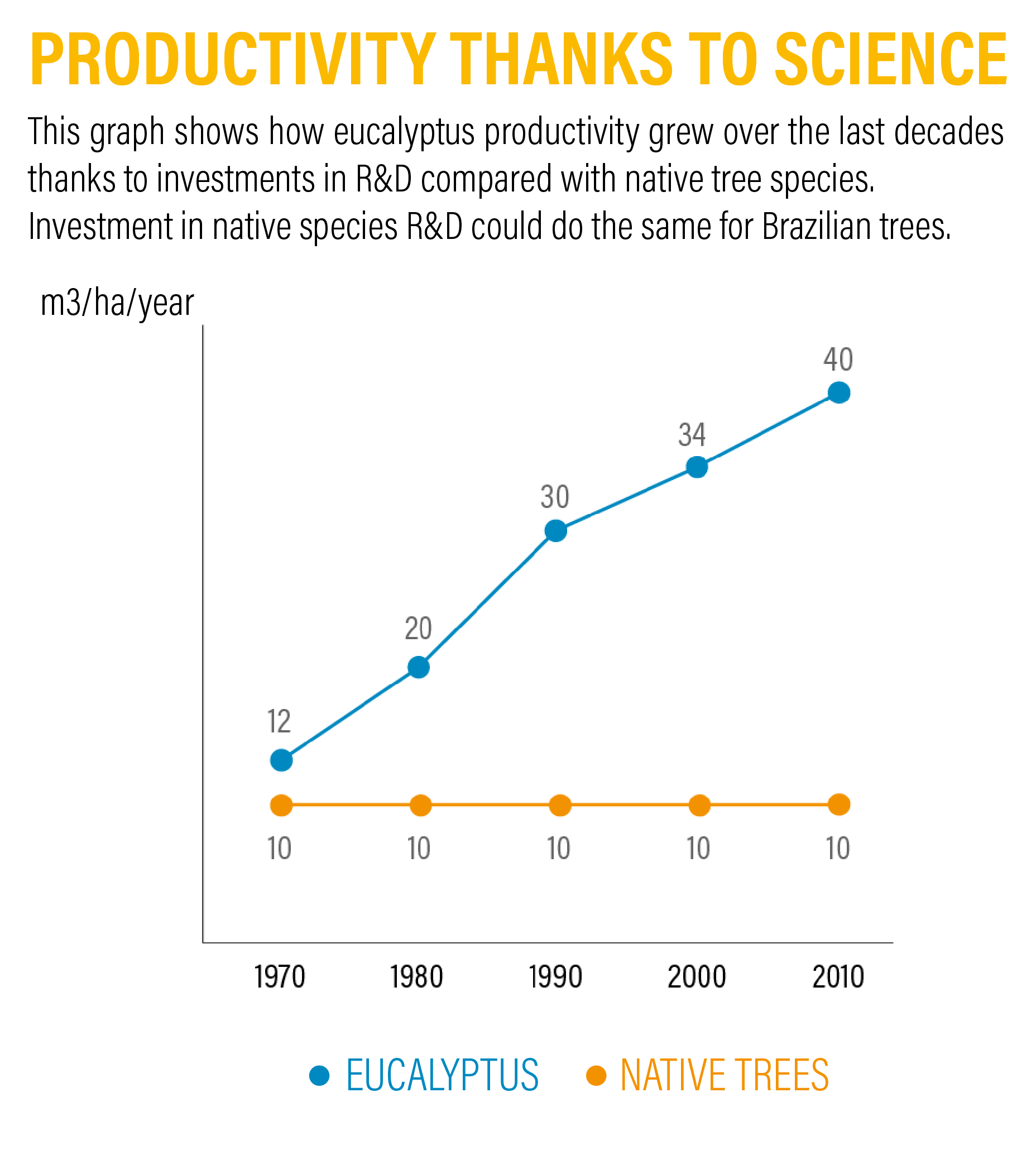 The study showed that several Brazilian native tree species could benefit from R&D. From a preliminary list of 45 potential species, 30 species, like the araucaria and the Brazilian mahogany, were selected – half in the Amazon and half in the Atlantic Forest biome.

Four investment scenarios were developed based on the number of species and duration of the R&D program. The results showed that the amount of money needed for each scenario is relatively low. A cost-benefit analysis for one of the scenarios showed a return of USD 2.39 in benefits for each USD 1 invested in R&D over a 20-year period.

A R&D program to fill the gaps

In the short, medium, and long term, R&D can make Brazil a global leader in making native species viable for the timber industry. The study identified knowledge gaps in eight research themes

The study also presents a proposal to establish a platform, led by the Brazilian Coalition on Climate, Forests and Agriculture, that collects public and private investment from governments, companies or donors to fund open research on native tree species. By proving that this research is useful, the platform would help convince the forestry industry to invest more in their own R&D.

Tapping into a great opportunity

Growing native tree species for timber in Brazil can help meets the domestic and global demand for legal timber, while reducing the pressure on illegal deforestation in the Amazon and creating thousands of jobs for local communities in rural areas. At the same time, native trees protect water quality, biodiversity, and soil better, while sequestering more carbon.

Investing in R&D for native species can help Brazil create a 21st century forest economy and achieve its national and international commitments. It’s too good of an opportunity to pass up.