The babassu (Attalea speciosa) is a species of palm tree that thrives on the peripheries of the three major types of Brazilian forests: the Amazon, the Caatinga, and the Cerrado. Babaçuais, as these unique forests are known, cover about 20 million hectares of Brazilian territory, mainly in the states of Maranhão, Tocantins and Piaui. This hardy tree not only grows in dense closed forests, it also acts as a pioneer species that can help colonize degraded and deforested areas, helping other species take root. The babassu is also an economic asset: Its coconuts produce rich oil and strong plant fiber.

From the late 1980s, however, babassu production has suffered a continual decline. The spread of intensive agriculture and livestock production destroyed the babaçuais forests, and the introduction of cheap, imported palm oil from Asian producers replaced babassu oil as the key ingredient in Brazil's personal care, perfumery and cosmetics industry. Some local producers closed down, threatening the livelihoods of the more than 200,000 people who depended on the babassu industry.

Tobasa Bioindustrial de Babaçu, a certified B Corporation, was founded in the late 1960s with a mission to invest in new technologies to make babassu coconut production more efficient. Tobasa separates the various parts of the babassu coconut and finds a commercial destination for each of its components. For Tobasa, less waste means more profit and less environmental impact.

Today, Tobasa is the only industrial complex of its kind in Brazil. The company produces activated carbon for use in residential and industrial water filters, bioalcohol for use in the cosmetic and beverage industries, and other babassu by-products like meal, which is used for animal feed.

To ensure that its supply is both of good quality and consistent, Tobasa works closely with the local communities who harvest babassu palms. Babassu harvesters formerly could only sell the valuable inner nut, which is only 6 percent of the total mass of the coconut, but, thanks to technological innovation, Tobasa can now use the entire coconut to produce goods for the market. By buying the whole coconuts, both the nut and the shell, Tobasa ensures that farmers get the most out of what they harvest.

Kaeté Investimentos, an Initiative 20x20 financial partner, became a partner of Tobasa in 2016. Through its Multi-Strategy Sustainable Investment Fund for the Amazon, Kaeté has invested R$8 million (US$2.2 million) in the project, with the objective of improving the industrial process and increasing production capacity. Kaeté's investment has allowed Tobasa to expand its operations and the number of its babassu harvesters it works with.

As of 2018, Tobasa now buys babassu coconuts from over 120,000 hectares in the region, benefitting thousands of local producers. Since 2016 alone, its reach has expanded by 60 percent, and the company has begun to work with an additional 1,500 families. The more babassu that local communities produce, the more income they generate. In this way, Tobasa indirectly incentivizes farmers to plant trees and restore degraded land throughout the region. The area managed by the Tobasa-affiliated communities already stores more than 19 million tons of CO2 and sequesters an additional 1 million tons per year. If more land is restored to meet growing domestic demand for plant oils, more carbon will be stored and more communities will benefit. 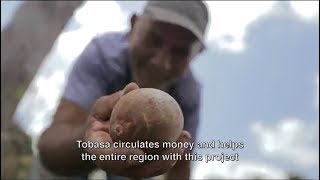