Several hundred million orange and black monarch butterflies travel between Canada, the United States, and Mexico each year. After completing their mammoth journey, the monarchs arrive in the hills of Michoacán, Mexico, where they settle down for a few months to rest and breed in the 56,000 hectares of the Monarch Butterfly Biosphere Reserve, a UNESCO World Heritage Site.

The livelihood of the monarch depends on the oyamel or sacred fir tree (Abies religiosa) that grows there. The butterflies spend December to March each year clinging to these trees that protect them from the rain and the chill. But deforestation throughout Michoacán over the past decades has fragmented the habitat of this iconic species.

Without realizing their immense ecological value, people have illegally harvested oyamel trees for woodfuel and timber. At the same time, a major forest fire in 1978, followed by severe seasonal rains, washed away fertile soil. The result is that hundreds of thousands of tree seedlings, planted in an effort to restore this area in the past 30 years, have died. And the area is not naturally regenerating quickly enough to fully restore the landscape, partially because climate change is increasing temperatures in the reserve, shrinking the area where the oyamel can grow.

The disappearance of the oyamel forest is not only affecting the monarch butterfly, whose population has decreased by 80% in just 20 years, but also the local communities that own the forest and rely on it for their livelihoods, water, healthy soil, and erosion control.

In 2016, Initiative 20x20 partner Land Life Company began to reforest over 100 hectares of degraded land in the Reserve, restoring the monarch's habitat together with Mexico's National Forestry Commission (CONAFOR) and its National Commission for Protected Areas (CONANP), local communities, and the World Wide Fund for Nature (WWF). The project, along with others throughout the Reserve that have planted more than 4 million trees, has helped stabilize soil, cool the surrounding area, and bring streams spring back to life.

The local communities are taking action and have begun a 24-hour surveillance program to stop illegal logging, but still lack the funds or technical knowledge to restore the degraded land surrounding their homes. In the near future, Land Life Company and its partners hope to close this gap and plant more trees in this critically important and biodiverse ecosystem. 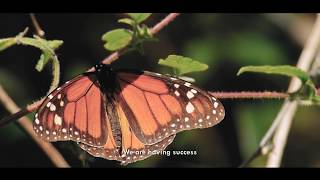