In Brazil, demand for palm oil is growing. Rising import costs have spurred domestic production, generally using non-native African species. The result is that large tracts of forested land are being cleared for monoculture oil palm plantations. This expansion of this type of plantation negatively impacts the environment, causing land degradation and deforestation. The native Brazilian macaúba palm tree, in contrast, when it is planted in silvopasture systems on existing cattle pasture causes no degradation or deforestation. The trees also provide shade for cattle, all without harming yields. INOCAS, a pioneering Brazilian start-up implementing this innovative macaúba silvopasture system is pioneering a sustainable alternative to traditional monoculture palm plantations.

INOCAS trains smallholder cattle farmers to harvest macaúba palms on their land. Farmers are paid for both their labor during the macaúba harvest and for the amount of crop that they grow, potentially doubling their annual income. Even though macaúba naturally flourishes in the Cerrado ecosystem and can be integrated into agroforestry and silvopasture systems, it has until now remained largely unexplored, as it has lacked a structured commercial value chain. INOCAS intends to change that: it will process the macaúba fruit into plant oil, animal feed and a dense biomass granulate and sell these products to meet growing demand for palm products in Brazil. Crucially, INOCAS could potentially produce enough palm oil to sustainably meet rising domestic and global demand without any additional forest clearing or land degradation. Plus, the project was certified by an independent research group from Leuphana University, which was supported by EUR 2.7 million of funding from the European Union.

Planting trees on a third of the Alto Paranaíba region in Minas Gerais State would be sufficient to meet the entire demand for imported palm oil in all of Brazil. The long-term macaúba production potential in Brazil exceeds current global palm oil production volume and could therefore become a sustainable way of meeting a large proportion of global demand. Put another way, if INOCAS is successful, it could dramatically disrupt the global palm oil market, a leading cause of deforestation and carbon emissions in tropical countries.

INOCAS's project is located in an area where smallholder farmers and agricultural laborers suffer from both low incomes and high seasonal unemployment. Since the macaúba harvest season does not conflict with the important coffee harvesting season, the project will increase the incomes of local people by providing employment during what was previously the agricultural down season. Through its extensive tree planting, the project is also expected to sequester around 600,000 tonnes of carbon dioxide, avoid further emissions from deforestation, and reduce pressure on a region suffering from high rates of deforestation.

Through its Althelia Climate Fund, Initiative 20x20 financial partner Mirova provided a bridge loan to INOCAS to kick-start the 2016 harvest season and has advised the Multilateral Investment Fund (MIF) of the Inter-American Development Bank on a planned equity investment in order to implement the first phase of the project. The Althelia Climate Fund will help organize the value chain for the macaúba palm fruit, commercialize the products, and finance the planting of 2,000 hectares of macaúba palm trees on smallholder pastures. The ultimate aim is to reach commercial viability, at a large scale, so that macaúba becomes a credible deforestation-free alternative to African palm oil monocultures. 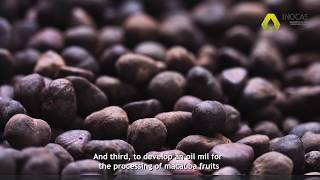